This collection of dolls features 17 inch dolls that are produced in limited numbers. They are released exclusively by The Disney Store and are highly sought after by collectors.

The first doll released in this series. The Exclusive Limited Edition Deluxe Snow White Doll is truly the fairest one of all! The gown for this elegant Snow White and the Seven Dwarfs collector's doll was inspired by Elizabethan period fashion with lush fabric textures, delicate golden embroidery and intricate trims. Walt Disney's original princess is certain to take her rightful place at the center of your own collection. Worldwide Limited Edition of 5000.

Released March 2010. With its intricate details, this beautifully designed doll magically captures the Bayou wedding scene from Disney's The Princess and the Frog. The delicately bejeweled floor length veil is capped by her sparkling tiara. The elegance of her rich green, multi-layered dress is highlighted by cascading leaves encrusted with faceted rhinestones, crinkled organza and iridescent satin. Painterly detailed evening gloves, glittery dewdrop earrings and necklace as well as leaf-inspired shoes complete her ensemble. To add a touch of fun, our Princess Tiana doll comes with her ready for the kiss Prince Naveen as a frog! Worldwide Limited Edition of 5000.

Released October 2010. The third princess in this highly collectible series from Disney.
With its intricate details inspired by 18th century French fashion, this beautifully designed Belle doll captures the essence of the Beauty that turned a Beast into a handsome prince. The elegance of her golden satin dress is enhanced by the intricate layers of gathering, each punctuated by a shimmering golden rhinestone. The bodice is accented with five perfect golden roses, each capped by a single glittering stone, and gleaming golden jeweled strands which add to the magical look befitting a Disney Princess. A delicate swag of luxurious chiffon held in place by gorgeous golden roses adds the perfect touch to an exquisite gown. Belle holds a single glittering red rose; a fitting testament to the power of true love.

Released in March 2011. The villainous woman who stole the baby Rapunzel, to use the girl's magical hair as her own fountain of youth, has been exquisitely captured in meticulous detail by a Disney character artist in this Limited-Edition Deluxe Tangled Mother Gothel Doll. Worldwide Limited Edition of 1500.

The Disney Store Limited Edition Alice in Wonderland 17" Alice doll has been carefully crafted by Disney Artists to express the whimsical personality of the daydreaming heroine, appealing to collectors and Alice fans alike. Tumble into the upside-down world of imagination with this fine Disney collectible! Worldwide Limited Edition of 500.

Our Limited Edition Queen of Hearts Doll has been carefully crafted by Disney Artists to express the capricious personality of the ruler of Wonderland. You may just lose your head over this fine Alice in Wonderland collectible! Worldwide Limited Edition of 500.

Jack's patchwork queen is now an elegant figurine sure to sew up the title of most frighteningly fabulous collectible doll of all! Leave Sally on view in her satin-lined coffin case or she'll rise to the occasion of your favorite shelf. Worldwide Limited Edition of 2000.

Our elegant Pumpkin King figurine buries any competition for the honor of being the most frighteningly fabulous collectible doll of all. Leave Jack on view in his satin-lined coffin case or let him rise to the occasion of your favorite shelf. 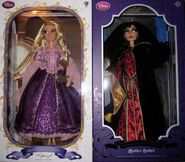 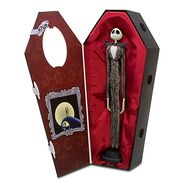 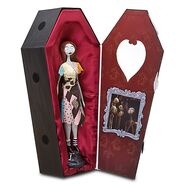 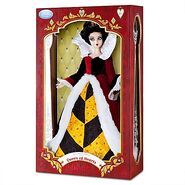 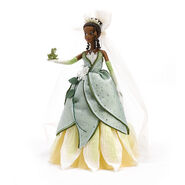 Limited Edition Snow White
Add a photo to this gallery
Retrieved from "https://disneydolls.fandom.com/wiki/Limited_Edition_Deluxe_Dolls?oldid=3986"
Community content is available under CC-BY-SA unless otherwise noted.